Is Now the Time to Enter the Cyclical NBA Market?

Is now the time to re-enter the NBA market? Is the selloff finally over?  It is my opinion that the Sports Card Market is still very cyclical, and you absolutely should look at basketball cards AGAIN. Some might be thinking why now, the season is almost over. All I have to say, is “Good things happen to those who are patient”.  There are no free lunches and buying offseason and holding for 6 months is as close to a free lunch you will ever get. Just another example of doing the opposite of what the crowd is doing.

Don’t get me wrong, I love the NFL and football cards, but if you have the wallet and the ability to hold for upwards of 6 months. The TIME IS NOW. Consider reentering into the basketball card market. We have seen a drastic and sharp price decline across the NBA landscape in August which continued into September. The timing is odd given the rise of the NBA playoffs, but also, shows the force that is the NFL. You have to think Zion and Ja didn’t make the playoffs and Luka’s early exit contributed to the sudden drop in prices. As many flippers and investors cashed out during the NBA playoffs and shifted money into the NFL season, shouldn’t be shocking… I’ve said all along there are not nearly as many hobbyists as there are opportunists. I have been collecting for years and even I couldn’t keep some cards given their rise.

Let’s take a look at some numbers, which help give us a better idea of this 2 month slide. 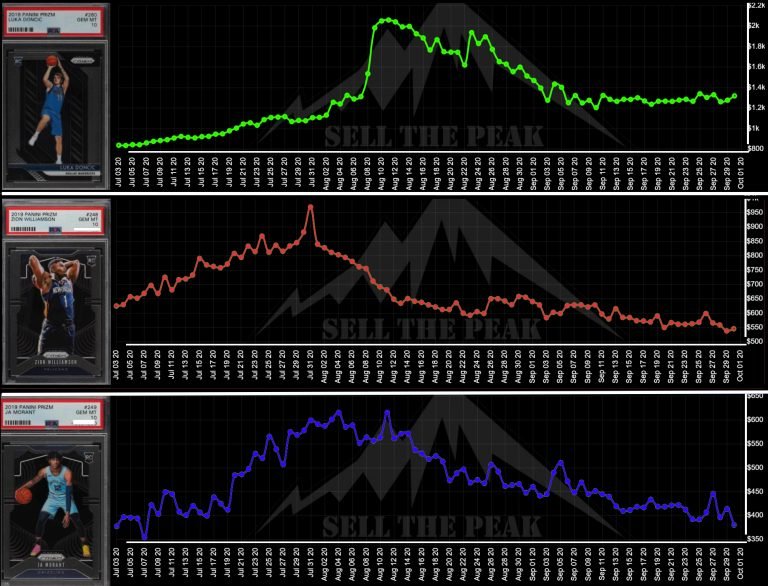 Looking at some of the most popular players and their iconic/key cards, nobody is “safe” relatively speaking… Lebron is in the NBA Championship, is the most accomplished player since Michael Jordan and Kareem, and he has lost about 40% of value. Other players like Luka, Ja, and Zion are down nearly half from their peaks in August. Sure that is hype driven, but still something to take note of. I can only logically contribute this to a shift in money to the NFL and people taking profits. The hobby is strong; people follow the sport that is hot. One thing I feel that is responsible for the early run up in April/May was “covid bucks” and everyone sitting on their couches trying to make some cash. The latest rise was from the restart of NBA games in July and speculation that Ja/Zion might have a chance to get into the Playoffs. It is in my opinion that we still are still a very season oriented and a cyclical hobby as a whole. People have short attention spans, and focus on the quick bucks that is “in season” volatility.

As attention weans from one sport to the next, so do prices of the latter. This is why I believe we once again will see prices shoot up once the 2021 NBA season draws nearer, whether that be in December, January, February, or March. Patience is key here people.

I am by no means saying we will see those August all-time highs again. I have a feeling a lot of people got burned and many lessons have been learned, but then again, I also don’t think many learned their lesson, lol.  If you have the patience and the ability to hold a position for up to 6 months, you could be handsomely rewarded in the near term. This is not a short term position, we are unlikely to see short term gains, more of a stagnant or even a lower trend line being set as Football has everyone’s focus. If you have the ability, exit a few football positions, take your profits and enter the NBA again. Just wait until the season begins. Good Luck, and as always, Happy Collecting.