This is arguably the easiest and simplest way to make money in sports cards; buying in the offseason. When whatever sport you dabble in is on vacation, there is very little buzz surrounding it, this is when you strike! This hobby is built around the present; what have you done for me lately and the reactionary purchases during the season. Yes, it’s really as simple as buying Football Cards in February/March, Baseball in November/December and Basketball in July/August.

This particular strategy is one of the long plays in the how to “Make Money Investing in Sports Cards” game. This strategy usually requires patience and a higher bank roll to execute as the hold times typically are a bit longer. There are two ways to make this work effectively. You sell before the season starts or you sell during the season and time the market. I know some investors who buy during the offseason and sell before the first game even begins, they swear by it. I know others who love the gamble and want to capitalize on the seasonal volatility.  I think both have their advantages and disadvantages.

Let’s take a look at the six cards shown below and dive into the details of how they fared from the start of the offseason to the end of the regular season. 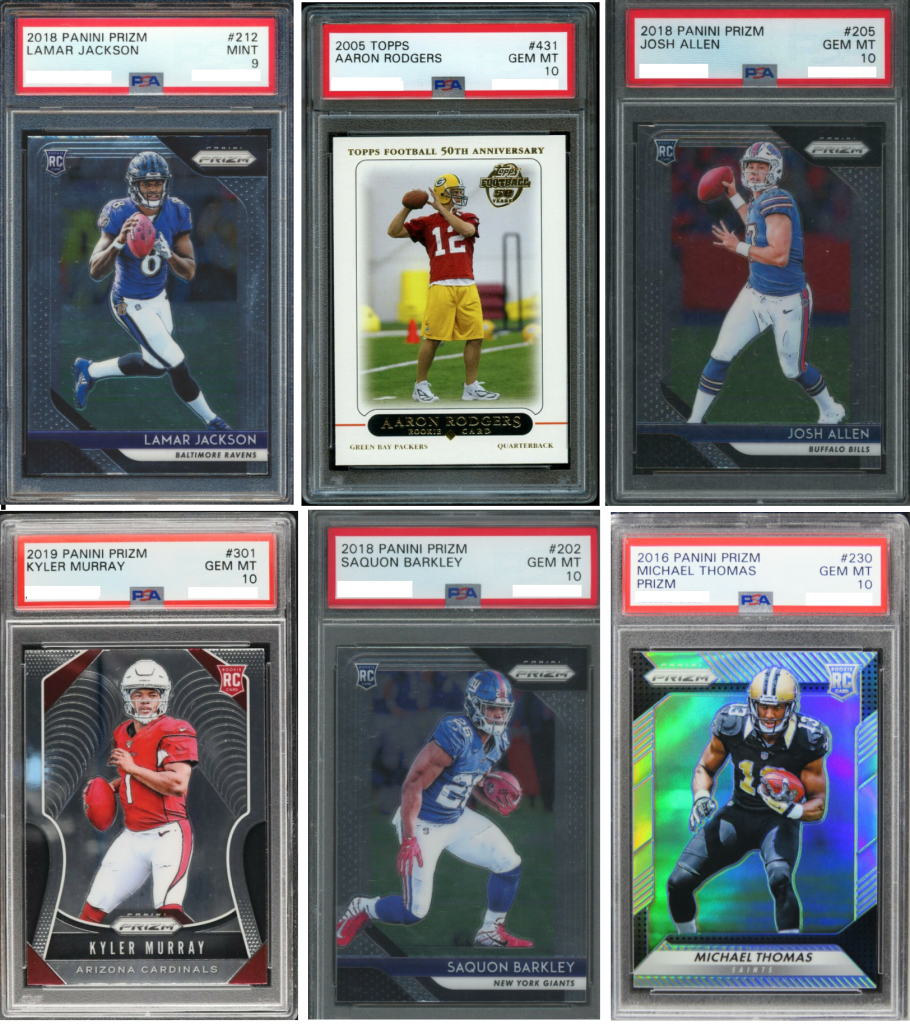 Below is a sampling of some of our purchases and how they fared after the 2020 NFL season was complete. All data was obtained from the SellThePeak Charts Membership Program. I will say the March price surges helped most of these cards initially.

As illustrated above, every card made money regardless of which strategy you implemented. As I pointed out, I think the circumstances surrounding the explosion of the hobby in the Spring of 2020 had a lot to do with this uptick in prices as a whole. Regardless, based on an initial Total Purchase Price of $930 had you sold just before the season you could have likely walked away with Total Sales of $5,350 or a PROFIT of $4,420! If we decided to wait it out and sell at season end, our total season end sales would have been $3,325 or a PROFIT of $2,395! Not too shabby either strategy you decided to roll with.

Now there is a certain level of risk/reward with both of these. We need to understand, players get hurt, some don’t live up to their hype, and others have MVP seasons (Rodgers) and their card prices go up considerably. However, does that risk outweigh the overall reward? Let’s dig deeper.

We know Dak Prescott exploded onto the scene the first few weeks of the season, then got hurt. Michael Thomas and Saquon Barkley spent much of the 2020 season on the Injury List as well. Lamar Jackson and Kyler Murray had a ton of buzz leading up the season and really didn’t meet expectations, so their prices fizzled. So of our seven investment players, five (approximately 70%) underperformed to some degree. Only Aaron Rodgers and Josh Allen actually saw price increases from their performances during the 2020 season.

So that leads me to my next point. Is it really worth holding these guys throughout the season? Personally, I do not think so. I live by the first strategy; “Sell before the season”. I am willing to give up any potential upside from a few players that might blow up to save the downside of the majority. As an investor, I usually try to spread my investments out, not focusing on just one or two guys and holding out for the season to start. In my opinion the early exit is by far the more profitable approach versus risking it all for a season play. Yes, I know I might get ridiculed for this, but sometimes it’s not about maximizing profit, but limiting downside. If you are a gambler and prefer the second approach, by all means, go this route.

I’ve utilized the buy during the offseason and sell before first game approach for several years and cycles in the hobby. I felt there wasn’t going to be an offseason this year for the NBA and even those prices softened in Aug/Sept. Now that you have become experts give it a try. Do some research, go find yourself some players you are high on, and acquire a few positions. Timing matters… remember that! When everyone else is head deep in one sport, you buy the one nobody wants.

A Look Back at Sports Card Prices: Then and[…]